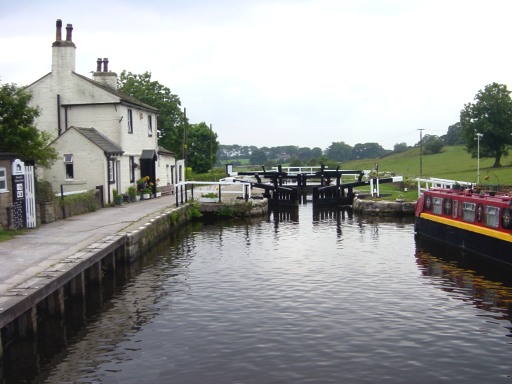 On a rainy day in October we could be forgiven for expecting a reduced turnout for Andrea Smith’s fascinating account of the Skipton to Barrowford section of the canal.  How wrong we were, with extra chairs brought just in time, the barn was full.  Why, when and where it was built were all explained at a depth which satisfied the enthusiasts without over loading those with only a passing interest.

Replacing a set of lock gates at a cost of £26,000 sounds extreme until we learn that they have a life expectancy of 60 years.  One gentleman said ‘I’m very interested in canals but I learnt things this afternoon’, an accolade to which the author of this blog wholeheartedly subscribes.

Why were there revolving posts where the canal turns?  What happened if a horse fell in the cut?  What is puddling clay?  The answers to these and many other questions were answered in an interesting and informative way and illustrated by relevant slides.

If you missed it, I’m sure Andrea is set to become a regular afternoon speaker but in the meantime, two other of our members, Brian Jeffreys and Richard Matthews will be talking about the early trackways, the impact of the industrial revolution on our roads and the coming of the turnpikes.  Friday 20th November, 7.30pm at Pendle Heritage Centre.