The blazing sunshine of East Lancashire had turned to dull cloud by the time we reached Sizergh Castle, just south of Kendal. Nevertheless, it was a great day out, albeit ‘men only’ with regard to members of the gardens group (what happened ladies?).

Sizergh isn’t a castle at all, rather a medieval fortified house, subsequently extended to form a nice courtyard. It was not quite the dangerous Scottish borderlands of yesteryear here but one can imagine a strong solar tower as at Sizergh being a good insurance policy in medieval times. 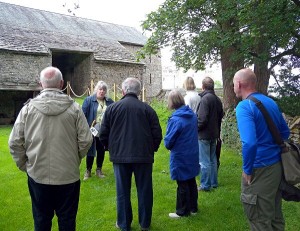 The guided tour of the garden was as humourous as it was excellent by a lady, called Chris, who carried her comprehensive knowledge lightly. We started at the Great Barn, once thought as being late medieval in date because a document refers to it being built. However, it was as a very large double entry late eighteenth/early nineteenth century bank barn with cattle stalls beneath the waggon entries and hay storage areas on the first floor. A close look later-on showed extremely large re-used crucks supporting the floor, clearly the fate of the original Great Barn. 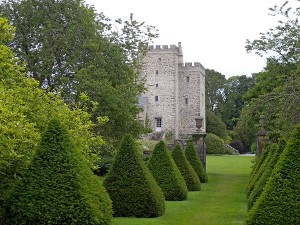 The gardens are mainly twentieth century. We went around the house, on its raised site, anticlockwise starting with a formal pyramidal yew avenue, planted in 1996 to replace an avenue of beeches which had to be felled in the 1940s. This led to the south garden, a large raised lawned area with a terrace to the west and an unrestored Dutch garden (1926) to the east. 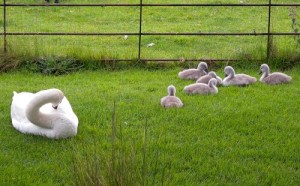 We then passed the cute photo of the day, a swan with its young. We didn’t get too close!

This took us to the large lake on the eastern side which reflects the house, its terrace and an enormous flight of steps. This was the garden at its most stately and it was very impressive, even on a dull day. 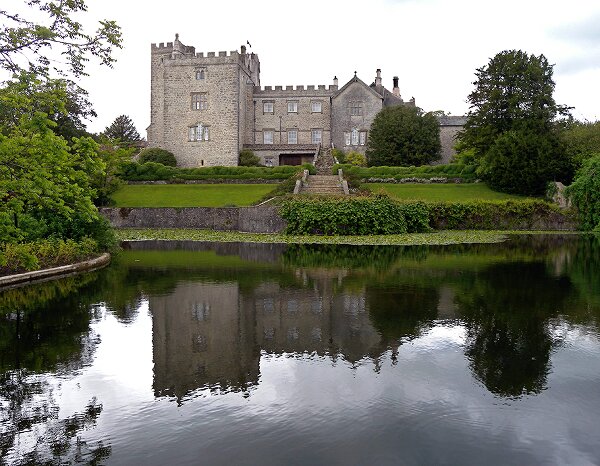 We then went onto the wildflower bank and saw some Greater Butterfly Orchids and Fly Orchids amongst the more common wild flora. 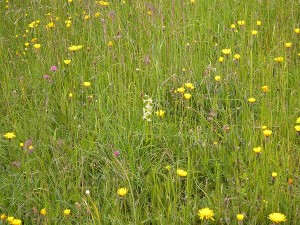 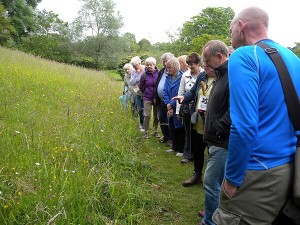 We then passed the herbacious border. This had been replanted around three years ago, though still retaining many of its original plants, including the old climbing rose ‘Blush Noisette’ developed by Philippe Noisette in the early nineteenth century. The border was full of life, colour and contrasting foliage. Just next to it was a charming little red Horse Chestnut in flower. 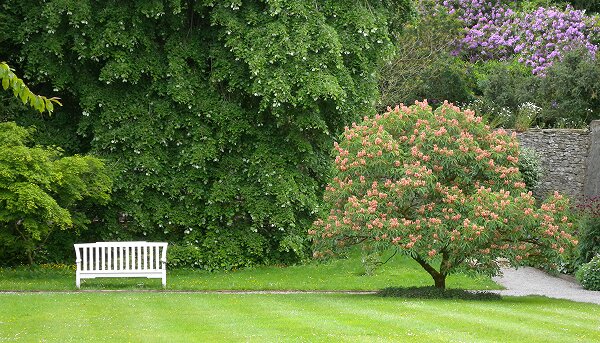 Next came the orchard, which had various apple, cherry and other trees in that middling period between flower and fruit. Finally, we arrived at the highlight of the garden – the Rock Garden.

The Rock Garden was designed in 1926-8 by local architect Charles Henry Wearing and is to the north of the house. It is created from large water-worn limestone blocks and water rivulets/small ponds, which are fed by an upper catchment pond and drain into the lake. It creates a memorable red, yellow and green contre-jour image with its particular blend of conifers, hardy ferns and Japanese Maples. 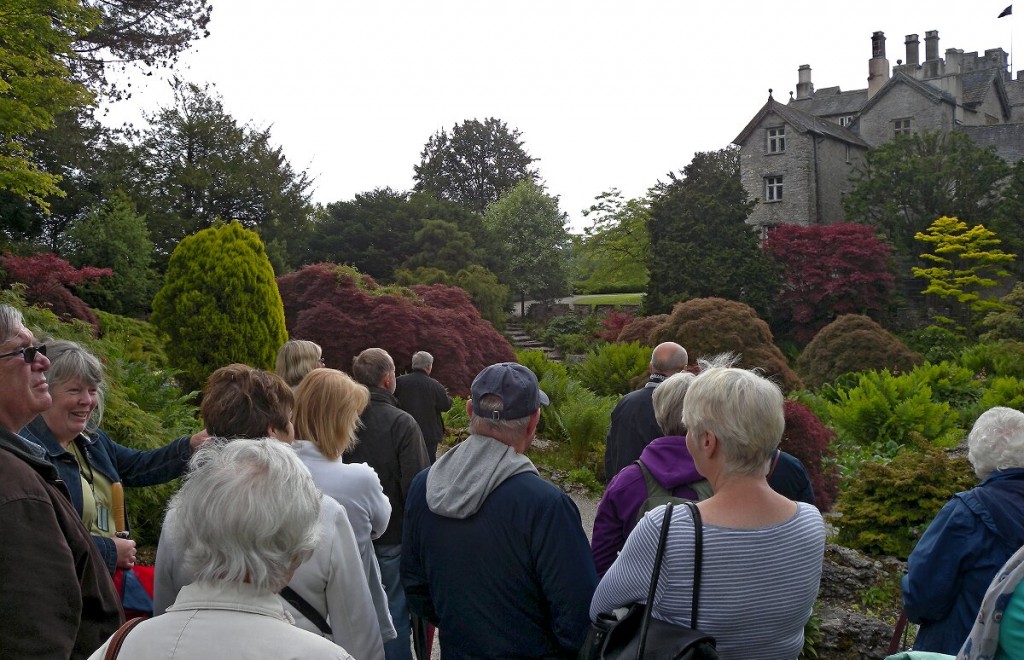 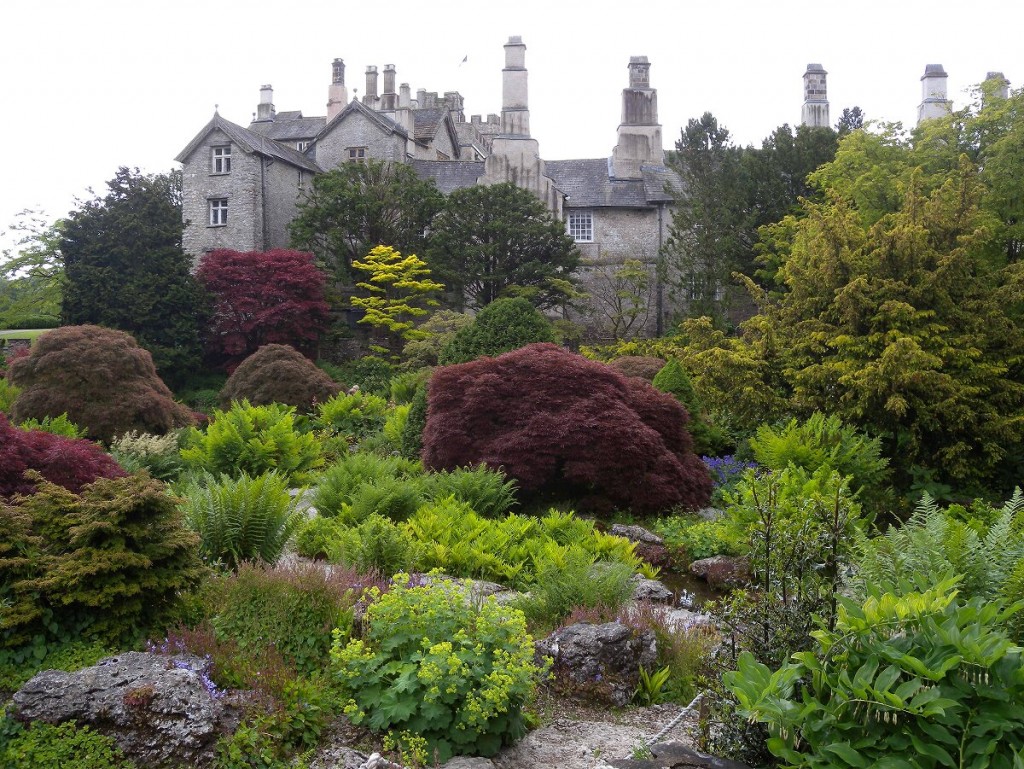 The garden has some 175 types of hardy fern and the tour ended with the current project of creating a fern garden, which was roughly halfway done.

Like most gardens in the north, Sizergh Castle is running about three to four weeks late so a mid-July to August visit would probably catch it at its best this year.

Following the tour we spent time wandering around the rock garden and various nooks and crannies and, after a cup of tea, we had a look at the interior of the castle with its superb Elizabethan panelling and overmantels. It was an excellent day and the staff were especially helpful and engaging.