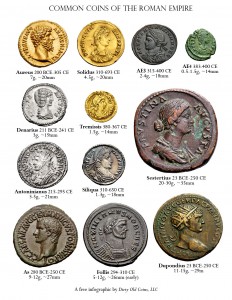 On the eveing of 24th April, Adrian Lewis gave an excellent overview of Roman coins, where they were derived from and how they evolved over time. He emphasised the importance of Greek ideas and forms, including the Goddess Athene and how these spread to Roman coins. However, the portrait quality of Greek coins was always better than the Roman ones, especially those in the western empire. We saw a great number of examples from across the empire, Adrian giving us various anecdotes about each emperor and the relevant points about each example.