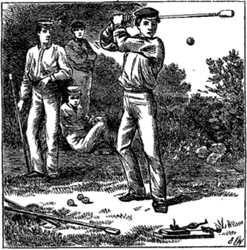 Peter Copestake of Pendle Heritage Moviemakers started our Wednesday afternoon movie meeting with a fascinating film describing the history and restoration of the wonderful 18th century garden at our Heritage Centre. Interestingly, there will be an Open Day on 20th June with free admission to the garden, strawberry and cream teas, an archaeological dig and other attractions, so if you missed the film, join us an hour in the sunshine (hopefully)!
Whilst we waited for the main feature – an insight into the almost forgotten sport of Knur & Spell – our two lovely usherettes handed out tubs of popcorn! Played to huge crowds, mainly in East Lancashire and West Yorkshire Knur and Spell was a game of skill where players vied for the coveted title of World Champion. The ball (knur) was held on a spell from which the knur was hit as far as possible to establish the winner. Many designs of spell were used and being privileged to have the reigning World Champion, Len Kershaw to answer questions we gained quite an understanding of the nuances of scoring! Len brought a fine range of memorabilia including his coveted cups, examples of the equipment and photographs to finish off a memorable afternoon. Our thanks to both Peter and Len.