On Saturday 15th November we set off in hope of finding the Wolfenden vaccary.  After parking in the centre of Waterfoot we walked up Millar Barn Lane to Booth Road and then went in search of the site of an excavation (2009), of a tithe barn near Wolfenden Green.  Unfortunately since that date Waterfoot Primary School was built over it!  However we did get a glimpse of the white rump of a deer disappearing into a clump of trees.

The next stop was Fearns Hall, one of the older buildings in Rossendale, with a date stone of 1696.  We walked up Fearns Moss which may be the eastern boundary of the winter pasture and passed the end of Tunstead Lane which runs to the Tunstead vaccary.  We viewed the summer pasture near Farm Hill Farm (and a rather nice pair of old gateposts). 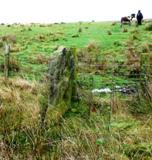 We didn’t venture further as Pam (well known for her muddy walks) said that the path, which she had recced earlier in the week, was too boggy even for her.
Continuing along the proper footpaths of Edgeside Lane and then the drive to Meadow Top Farm we came across a series of slippery stiles, one was so broken that one walker risked doing a limbo under a barbed wire fence rather than climb over. Here we were venturing over a drier part of the summer pasture.  Eventually we ended up at Bridge Clough reservoir and then Shawclough. Returning along Edgeside Lane we passed Penrallt Cottage (1779 Grade II listed,) with a lovely date stone (see Stories in Stone, John Taylor p167), unfortunately too far away to get a good photo.

Lane Ends Farm is another listed building (18th century, no datestone) on the corner of Edgeside Lane and Park Road.  Carrying on down Park Road we reached Booth Road and retraced our steps to the car park.
And it hadn’t rained!!