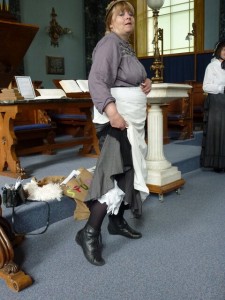 With only 11 participants rather than the planned 17, we arrived at Saltaire United Reformed Church at 11.30am as instructed and were ushered in by an extremely common mill girl, Ellin Dooley.  As we sat relaxing in the pews, she introduced Mrs Caroline Hill ‘who is ever so good to me, you know.  Why only this morning she gave me some lovely frilly bloomers because mine were still damp.  Look…’ as she pulled up her skirt to reveal them!

Having handed out bookmarks – one for each of us – with the name, occupation and address of an actual past resident of the village she then asked who had Colonel Thomas Henry Hill, the wife of her colleague Mrs Caroline Hill. Peter was the target and was made to stand at the front as Mrs Hill explained to us how important her husband was as Head of Security and how they lived in a 5 bedroomed house.  Finally he was allowed to sit down.

Elllin then started talking about her husband and their 12 children as she invited her husband Henry (aka Roger) to join her and give her a hug as she surprised him withe news that they was now expecting number 13!

Mrs Hill narrated the history of Saltaire and the life story of the rather egotistical Titus Salt with regular interruptions from Ellin.  So rude.

We were then escorted on a tour of the village by Mrs Hill taking in the various addresses of the rest of the bookmark characters, with constant jibes about Ellin Dooley.  An excellent tour.

The group then split as some moved off for lunch in one of the local cafes, the others enjoying a picnic in the sunshine by the river.

A thoroughly good time was had by all and was rounded off  by a trip other parts of the village or round the shops.  It was lovely to have four new faces on the trip who were hopefully inspired to join us on future events.