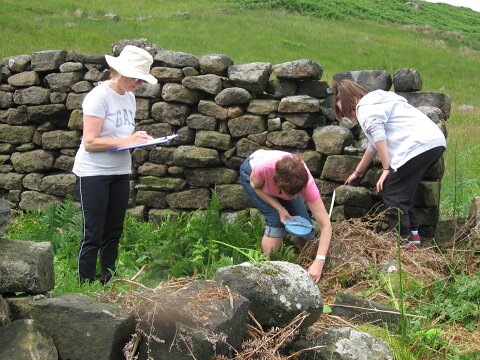 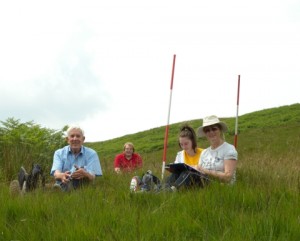 Having recorded and measured the big barns, we are now looking at the smaller and often ruined structures. These, like the one we saw on 2nd July near Turnhole Clough, are often on higher land at the periphery of the country park.

Marked as one of several sheep folds on maps, we arrived at our subject about midday. It is shown as a small rectangular structure with a semi-enclosing drystone wall and marked ‘sheep fold’. It is located adjacent to an extremely steep slope down to a stream.

However, our first job was to actually find it as it was lost in waist-high bracken! Three of us ‘set-to’ treading down the bracken while the remaining four folk began measuring the structure after which the formal photographic recording took place, using a shift lens and old fashioned film.

Dressed quoins and an internal division suggested the building may have once been a small cottage, but there were no surviving window openings to confirm this. We also could not find any roofing slate, suggesting it had been open for a very long time (confirmed by the 1840s map) or had been thatched. There was possibly a door at one end. This is a mysterious structure, that is clearly related to the sheep fold. It is possibly a former shepherd’s cottage and/or a sheep house for shelter in extreme conditions.

Having measured and photographed it, we set back to the hamlet. 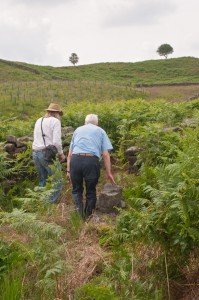 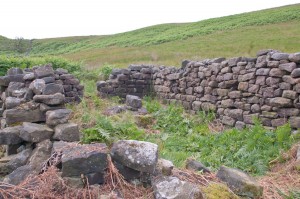 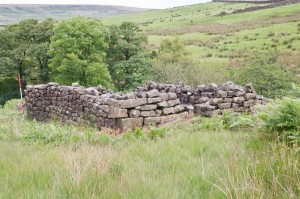 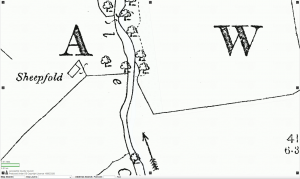