The coach (from Hodgsons as usual but without our usual driver Ian) left promptly from opposite the Malt Kiln in Barrowford at 8.30 am on Monday 11th April.
We drove to Piercebridge where we had coffee/tea and moreish shortbread biscuits at the George Hotel, a 16th century coaching inn. A clock in the George Hotel inspired Henry Clay Work’s 1876 song “My Grandfather’s Clock”. From then on a tall freestanding clock became a “grandfather” clock.

By the river are the remains of the Roman Bridge, part of a large bridge which carried Dere Street, the Roman road, which linked York with Corbridge, across the River Tees. The bridge was wood on a stone foundation. The remains now lie high and dry on the south bank of the river which has moved northwards since the bridge was built. 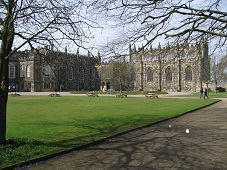 At Auckland Castle we headed for the café for lunch and were pleasantly surprised to find it in a rather elegant library, with waitress service. We were given a conducted tour at 2.00 pm. The castle, which has been owned by the Church of England for more than 800 years, was the former palace for the Prince Bishops of Durham and is still the residence and official headquarters of the Bishop of Durham. Over time the building was added to and altered by a series of Prince Bishops. St. Peter’s Chapel is one of the largest private chapels in Europe and was built by converting a medieval banqueting hall. In the dining room are 12 of the 13 celebrated 17c paintings by Francisco de Durban of Jacob and his sons, which the Church Commissioners wished to sell but these plans were shelved after a donation of £15M from investment manager Joseph Rutter, who also found that his charity, the Auckland Castle Trust, owned the Castle as well!

We checked into the Hogs Head Inn, Alnwick (named after the tavern in the Harry Potter books)

On the Tuesday we visited Barter Books which is one of the largest second hand book shops in the country sited at the former railway station. Its “Keep Calm and Carry On” poster is one of only two surviving wartime originals, the template for the slogan which you now see everywhere. A model railway runs overhead between the book cases. There is a restored station waiting room used as seating for the café and a huge room lined with over forty glass cases containing many antiquarian books.

We decided not to go to Alnwick Castle gardens because of the heavy rain. Instead we all visited the Castle which is, after Windsor Castle, the largest inhabited castle in England. The Duke and Duchess of Northumberland reside in Alnwick Castle in the winter months, and this is most evident in the Library, created by the 4th Duke in the Prudhoe Tower to house the 14,000 catalogued books in the collection. In addition to the books, the room now contains family photos, a television and a large collection of ingredients for cocktails! The walls of the State Rooms, several of which have been restored by the present Duke of Northumberland, are hung with Italian-style silk (now made in Suffolk) and artworks by masters Titian, Tintoretto, Turner, and there are several paintings by Canaletto. There is a gallery with china which has been collected by the Percy family over hundreds of years. Recently Alnwick Castle featured as Hogwarts School of Witchcraft and Wizardry in the first two Harry Potter films, also as Brancaster Castle in Downton Abbey

In the afternoon there was a coach tour around local sites: Alnmouth, where we didn’t stop, Craster where we visited a café and some bought kippers from the famous L. Robson and Son and finally Seahouses where one could take a boat trip to the Farne Islands, one of the UK’s top wildlife sanctuaries.

On Wednesday we visited the fine prehistoric site at Lordenshaws, an Iron Age fort. It was not easy to find in the mist. It was built at least 2500 years ago and is enclosed by three sets of banks and ditches within which the remains of seven round houses can still be seen. It has two entrances on the east and west sides, each with a holloway leading up to it. On a large rock a hundred yards away were some “cup and rings” carved in the stone.

We spent the rest of the day at Vindolanda where a dig was taking place. There was a model of the site near the entrance. One of the archaeologists gave us an introduction and mentioned the first and only Roman wooden toilet seat ever found! The fort is situated on the Stanegate, the Roman road connecting Corbridge with Carlisle. Construction started in the early 80s which saw the erection of five timber forts leading to the present stone fort which was built in the early 140s. The early timber forts were approximately twice the size of the present stone fort and the famous Vindolanda tablets were found in the earliest of these. On entering the site at the west end you pass into the vicus or civilian settlement and a temple can be seen, also a bath house. Passing down the west street to the fort, on the right is a mansio (an early form of hotel) and on the left a tavern. On the right, entering through the west gate, can be seen the headquarters building, commanding officer`s house and the granaries. To the left can be seen barracks and other buildings. Passing through the fort we walked down the slope to the tearoom and the excellent museum which has been refurbished in recent years. The Vindolanda Tablets were on display and also beautiful jewellery. A whole day would be needed to see everything including watching the volunteers digging in the cold.

We had a comfort and cake stop at Tebay services and returned to Barrowford.