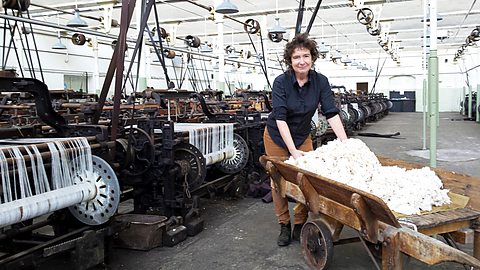 The cotton had gone, the ship canal had gone, the money had gone. In episode 4 Jeannette takes an unexpected turn by delving into the last 50 years of Manchester pop music. From Herman’s Hermits to Joy Division and The Smiths, making music that moved beyond the stereotype of the northern practical man.

In the final episode 5: Vision of the Future,  she discusses a computer called BABY, Alan Turing, 25 Nobel prize winners and the wonders of graphene. Pendle Hill, George Fox’s vision and the Quakers are also included. An ice age boulder at Owen’s College connects Manchester with its own long history back through time.