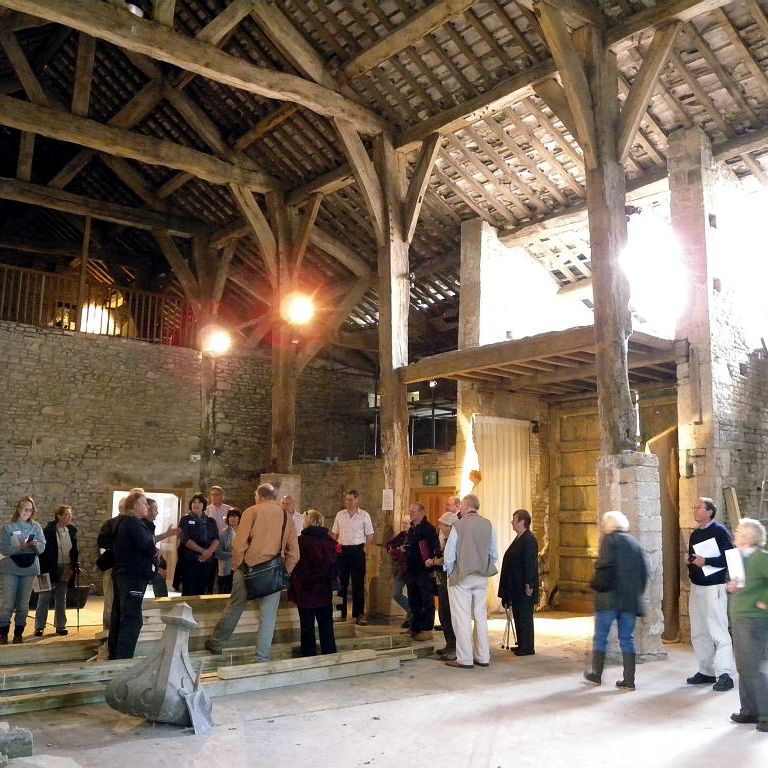 Yesterday, we visited a host of small to medium sized barns but, today, it was time to see two really big ones. However, before we set off in the coach, Jamie Quartermaine of Oxford Archaeology North gave us a fascinating presentation called ‘Flowing through Time: the archaeology of the Ribble Valley’ introducing delegates to the impressive archaeology of the valley, from Ribblehead to Hesketh Sands.

Our first visit took us to Gawthorpe Hall, Padiham.  Nick Taylor of the National Trust took us around the Great Barn – an aisled barn built in 1603-4 and reputedly the largest in Lancashire.

Inside there is an enormous and fantastic space nine bays long, shortened two bays by a large Victorian shippon at one end. However, the roof is visible above. The space challenged everyone with a camera to fit it all in! Nick then showed us around the unrestored parts of the gardens that visitors rarely see.

The king post trusses that sit on braced posts at Gawthorpe comprise one method of constructing a timber framed barn but using crucks is another, more ancient way.

Our next visit was to an equally impressive cruck barn at Hall Barns Farm, Stonyhurst. The modest outside stonework gave us no warning of what we were about to discover.  Whereas the impression left by Gawthorpe was that of space, at Stonyhurst we encountered almost sublime power, as five massive cruck pairs pinned a long space to the ground. This is surely one of the hidden gems of our area.

We then had lunch at Stonyhurst, immediately adjacent. We had just enough time for a quick look around the Chapel of St. Peter, designed in 1832 by J. J. Scoles (an altogether different interior!) before setting off for a coach tour of Bowland and Pendle and our last farm visit of the weekend… Little Mearley Hall Farm on the northern slopes of Pendle Hill.

At Little Mearley Hall Farm, we found a linear barn complex that had grown piecemeal over time, and still being used for dairy cattle. The Hall itself is lovely and just as complicated as the barns. The house detectives amongst the group set to work making sense of the broadly T-shaped building. The earliest parts are at the rear (originally the front) being late Tudor, with wings of 1600s to early 1700s and then an added front of mid 1800s with a wide chimney stack between the two.

The Hall has a truly unique feature, a two-storey half octagonal bay window like no other. Many of the stones are reputed to have been reused from nearby Salley Abbey, and they certainly look that way. The columns of the bay seem to have been constructed out of reused medieval buttresssses. Somewhat controversially, we concluded the window was a romantic construction of around 1840, using the medieval ornamental fragments from the abbey with some new stones to match.

This brought the day and the Historic Farm Buildings Group conference to an end. There were special thanks to Les hardy and Harry and Joan Grundy for all their hard work in the planning and preparation. For further information about the group, visit their web site here.