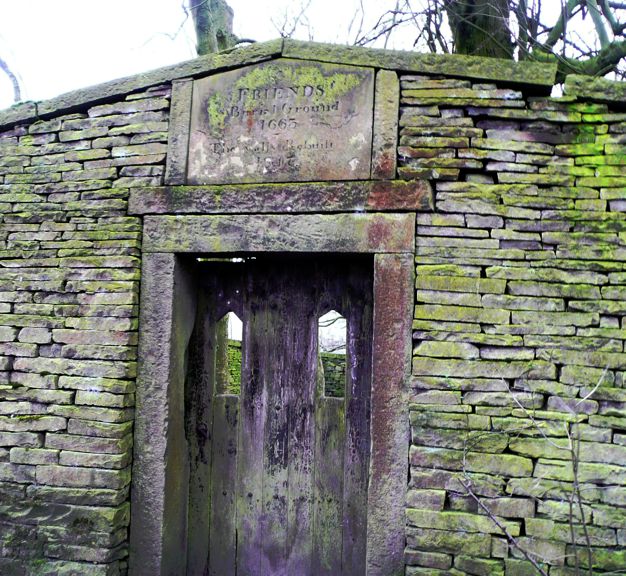 After meeting at the Corner Café in Crawshawbooth for refreshment we drove to Newchurch Rd in Rawtenstall and parked nearby.  Our aim was to find the likely site of Rawtenstall vaccary (a medieval cattle farm).  We set off up Waingate Lane, walking alongside Balladen Brook.  The path had deteriorated due to the heavy rain and when we reached Waingate village we made a detour up Hurst Lane and then Chapel Hill Lane passing a Quaker burial ground dating from 1663.  We then took a muddy path alongside Marl Pits Sports Ground emerging onto Edge Lane.  The lane narrowed and there was a sign warning against believing your SatNav.  We stopped to have lunch near an old 2 holed gatepost, not in its original position as it was horizontal! 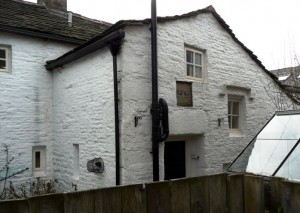 We walked to the top of Edge Lane and eventually rejoined the track round Marl Pits.  We paused to watch the golfers practising their swings in the middle of the vaccary.  We passed High Meadow Farm (perhaps a clue) and then took a circuitous route back to Hurst Lane and then to our parked cars.  There was a bonus at the end of the walk.  We had parked up a quiet side street and there was a row of very attractive old cottages dated 1691, somewhat unexpected in the centre of Rawtenstall.