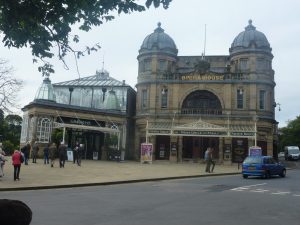 On Saturday 24th September 17 members of the Friends of Pendle Heritage Centre met in Barrowford and were driven direct to Buxton.  We had coffee in the Pavilion (designed by Joseph Paxton) and then were treated to a conducted tour of the largely Georgian town by a town guide who told us about the foundation of the town and its transformation from the original village to Victorian Spa town.  Some of the improvements made by the Dukes of Devonshire were noted but the renowned Crescent was shrouded in scaffolding; after many years of decay it is being converted into a five star hotel. 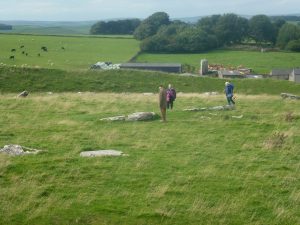 After lunch we again boarded the coach and drove to Arbor Low Stone Circle.  This is a henge regarded by some as the “Stonehenge of the north”.  It consists of an oval bank about 75 metres in diameter with about 50 large stones all lying down now but presumably the majority were standing formerly.  Nearby is a bronze-age burial mound which appears to be connected to Arbor Low by an earth bank.   This is built on top of a Neolithic long barrow. 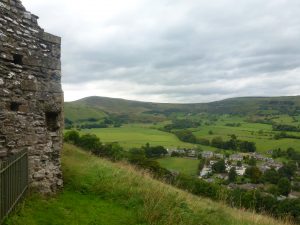 Later in the afternoon we drove to Castleton, the home of the ‘Blue John’ mines and shops which is where some of the party spent most of their free time (and money) buying Blue John jewellery.  One lady was overheard to remark that she had bought some Blue Peter which seemed unlikely.   There were other attractions; some people visited the local museum and Tourist Information centre and a few climbed up the hill to Peveril Castle.

After a cup of tea it was time to return to Barrowford, where we arrived about 7pm.