After the usual ritual of gathering in our ‘office’ aka the café at the Heritage Centre, eight of us reassembled on the eastern fringes of Roughlee – where our number increased to nine. 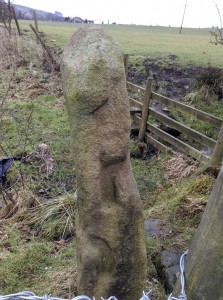 Our route took us over the stream, up a well made medieval track and onto the old ridge top road. We followed this until we reached Noggarth Top Cottage, passing the old site of the local golf links, then dropped down to Dimpenley Clough in the valley bottom. We followed the clough down to Roughlee & located the site of the old mill’s weir & leat.

The group then divided. The majority stayed in the valley bottom looking at local water management while two of us continued up to the top of the northern ridge. This was followed to Bank Ends after which we dropped to the valley floor at Blacko Foot. From here it was a quick walk back to Roughlee and the walk’s end.

Although confounded on a few occasions by path blockages & diversions, a number of features were observed, especially on the ridge tops and at Dimpenley Clough, that merit further investigation and research. Two old & somewhat odd gateposts were spotted on the walk. The one with the broken top was spotted on the northern ridge & east of Brown Hill. The other was from the valley bottom in Dimpenley Clough.

Thank you to all those who came out exploring. A few more walks and the first phase of the Hidden Valley project will be completed.