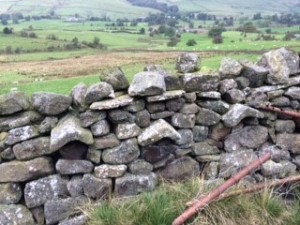 Six of us began at Lower Sabden Fold, observing the coaching ‘triangle’ created to allow carriages to negotiate the tricky corner and walked W along the coaching road before turning S down the track to The Old House. The site of our previous bloomery excavation was pointed out to those who had not seen it before, along with other features in the area such as the supposed rath excavated by Mary Higham and the approximate site of a supposed Bronze Age burial. Unfortunately, due to the very dull flat light, much of the ridge & furrow usually visible in this area was very difficult to see.

We then continued along the public footpath to the site of the now demolished Drivers farm and across another field to a junction of footpaths where a noticeable change in the rebuilt stone wall and platform on the other side indicates the site of a building (possibly a field barn?)  Next down hill alongside a sunken trackway to the ford over Sabden Brook where we paused for lunch.

Crossing the ford, we proceeded East along the lower contours of the S side of the valley, with excellent views of the N side; although as before very few features were visible due to the poor light. We passed behind ‘Back o’ Th’ Hill’ which, it is suggested may once have been a mill of some sort. (More research required) and along below the well quarried slopes. Some of the stone walls in this area include not just the local stone – presumably sourced from the immediate valley side – but some much finer, well worked architectural pieces. One might have suspected that this indicated a long since demolished building, but Richard informed us that the previous tenants of Lower Houses worked in construction and probably acquired this stone from elsewhere to repair their walls. (He also instructed us on gate hinges. Apparently they are hammered into a lead plug pushed into the drilled gatepost socket, rather than set into molten lead which is the method we has presumed). 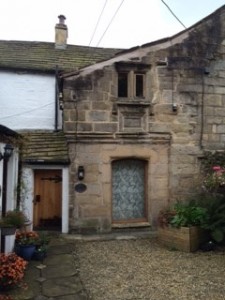 We continued on, crossing the road at Higher Town before eventually turning back NW across the watershed and returned to Lower Sabden Fold. By chance while looking at the rear elevation of this much altered building, we were invited into the back yard and were able to view some of the original architecture Including a date stone of 1577.