The MUSEUM explains the fascinating history of Park Hill and the ancient Bannister family, including its modern descendant, Sir Roger Bannister, the first athlete in the world to run a sub 4 minute mile! It tells about the mysterious Pendle Witches of the seventeenth century and of George Fox, whose vision on Pendle Hill inspired the international Quaker movement. Learn about the vernacular buildings of Pendle Forest and how they have been conserved by the heritage centre. Exhibitions include:

The story of a Lancashire farmhouse

Dating from the 15th century, Park Hill was a working farm for most of its existence. Use the inter-active computer to see how Park Hill grew from the first timber framed building to the house you see today.

The story of the Pendle witches

The story of the notorious Pendle Witches which resulted in their famous trial in 1612.

The history of the Bannister family

The history of the Bannister family, who settled at Park Hill in the 1400s, and the Swinglehursts who occupied part of the house from the late 18th century and built the Georgian extension. 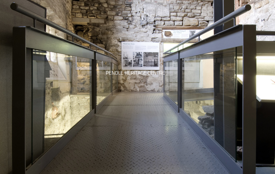