One of the area’s most ancient Christian sites, “Church Kirk”, near Accrington is up for sale. Its unique name simply means ‘the church’ in the old Saxon and Viking languages. The absence of any further description illustrates its importance to medieval people.

The Church Kirk story goes back to the Dark Ages when, the early Anglo Saxons were  gradually being converted to Christianity by the efforts of Saint Aidan of Lindisfarne and King Oswald of Northumbria. It was a violent and complex period where Northumbria became the first of the Saxon kingdoms to rule Britain.

Church Kirk was established on the site where King (and later Saint) Oswald camped with his army on his way to face the violent pagan King Penda of Mercia. Adjacent is Oswaldtwistle, the name meaning “Oswald’s camp in the fork of the river”. A battle took place on 5th August 642 at Maserfeld, near Oswestry, where the Mercians were victorious and Oswald was slain. Penda’s victory, however, was short-lived as he too was killed in battle near Leeds the following year.

Oswald’s remains were mutilated by Penda and hung on a tree (Oswestry means “Oswald’s Tree”) but were later reclaimed by the Northumbrians and became holy relics of medieval England. Oswald’s head survives to this day in St. Cuthbert’s coffin in Durham Cathedral.

Originally dedicated to Saint Oswald, Church Kirk contained a large shrine to the saint. A casualty of the Reformation, it was destroyed in 1537 “with pincers, axes, hammers, daggers and knives” by the notorious Roger de Rishton of Ponthalgh. The churchyard also had a Holy Well, which is recorded in several medieval documents. It was the well that King Oswald had used when his army camped there and one of a small number of Saint Oswald wells across England. The church was subsequently dedicated to All Saints and then St. James, a dedication shared by Accrington and Altham churches.

The church building has three broad phases, a medieval tower, a Georgian nave with balconies and a Victorian chancel. Each represents an important phase in the history of the area. The medieval tower is perpendicular in style perhaps early 1400s, though it is believed to date from the 1200s. It is a robust northern style tower, not tall but where large stone blocks give a sense of mass. 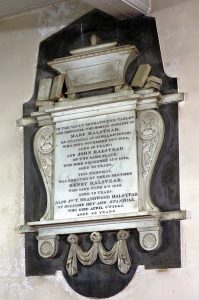 A monument by George Webster

The nave was rebuilt in 1804/5, just as the Leeds & Liverpool Canal was being built adjacent. Much larger than the original, it was to accommodate the greatly increased population that came with the industrial revolution. In contrast to the rugged medieval construction, it has plain ordered styling and water-shot stonework like the houses, chapels, weavers cottages and early mills of the time. Water-shot stonework is where regular blocks of stone were laid slightly tilted so that rainwater quickly ran off the wall. Inside the nave, there is a medieval font and a lovely series of classical wall monuments, two by the famous Kendal architect George Webster. 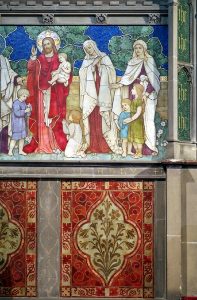 Part of the opus sectile mosaic

The late Victorian chancel reintroduced the Gothic style but with an Arts & Crafts twist. It represents a romantic response to the rational and functional thinking that underlay industrialisation. It was built to accommodate the High Church worship of the time, and to house a fine organ. It is especially beautiful with choir stalls that blend Decorated Gothic with art nouveau and an exceptional Arts & Crafts opus sectile mosaic of 1909 designed by Powells of Whitefriars.

The church interior is a beautiful light space with two excellent stained glass windows by Edward Burne Jones and William Morris and four more by the Arts & Crafts glass artist, Bernard D. Walmsley, who came from Blackburn but set up in Chapel Stile, Langdale, Lake District. Currently, the windows are boarded over for security, so the only lighting is artificial. 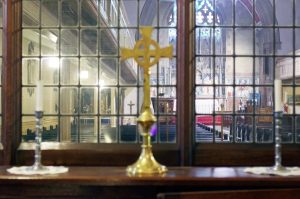 View of the nave and chancel

All in all, this is a wonderful Grade II* Outstanding Listed Building with an amazing history. The sale is being handled by Lea Hough Chartered Surveyors, Blackburn on behalf of Blackburn Diocese and the Church Commissioners. CLICK HERE for the sales particulars.