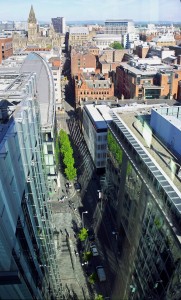 I went to a fascinating evening event in Manchester centre Wednesday, 10th June, about the new neighbourhood planning process and how it is working with regard to heritage and Liverpool city centre, especially the Baltic Triangle and Waterfront areas.

The session was led by Dave Chetwyn who is managing director of Urban Vision Enterprise, as well as chair of the Historic Towns Forum and a planning adviser to Locality. The other speaker was Gerry Proctor MBE, who is chair of the social enterprise, Engage Liverpool. They discussed the challenges of identifying neighbourhood areas and getting neighbourhood forums to work in the context historic area regeneration. The attitudes os local authority planning departments and developers were also considered. They explained the neighbourhood plan process and how it related to heritage and growth in a city context and how to put together a neighbourhood forum in a complex urban area.

The event was held in the office of event at Pinsent Masons on 3 Hardman Street, the top floor of a city centre glass box. It took a while to combat the vertigo when looking out of the windows!