Our mission was to find the extra pasture of Wolfenden Booth vaccary, which is known to be in Cowpe. 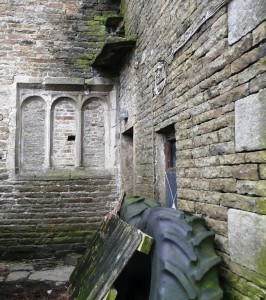 We set off from the car park in Waterfoot, crossed the river and made our way up a steep track several inches deep in leaf litter. Halfway up the track a heron was seen flying to its nest in a tall tree nearby. Eventually the track lead to Lower Lench Farm which has a three arch window dated 1511, believed to have come from St Nicholas church (founded in 1511), a couple of miles away at Newchurch. The farm is late medieval or early 16c. It is thought to be the site of a retreat used by the monks of Whalley. 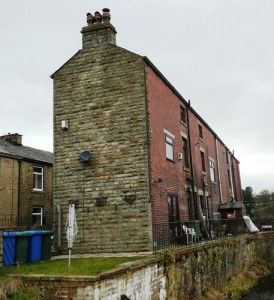 After looking at the nearby Mansion House with a pretty date stone of 1768 we walked down the cobbled road and then along Cowpe Rd. A local drew our attention to a terrace which is nicknamed “kipper row” as the houses are so narrow from front to back! Further along Cowpe Rd and down a side street we went to look at “Old Cowpe Hall” which has a date stone of 1752 but was rebuilt in 2008.

We had lunch below the impressive banking of Cowpe reservoir. Afterwards we climbed up to have a look at Rooley Moor Rd, (called Catley Lane in 17c) which may have begun as a pack horse route between Whalley Abbey to the north and the manor of Spotland, (in Rochdale) which was owned by the abbey, to the south. On our way back we walked through a field with 7 upright stones of unknown purpose. We had a good view of the valley from here and the land on the other side of Cowpe Brook not far from Lower Lench Farm looked to be good pasture and a candidate for the extra pasture of Wolfenden Booth vaccary. 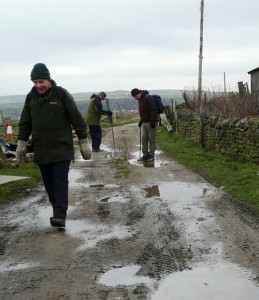 Having negotiated a difficult stile with help we eventually approached Clay Roads/Royds Farm and the reason for the name became very apparent. After trying to clean our boots we made our way past Tenterhead cottages (there had been a woollen mill nearby) and down the road eventually reaching the car park.