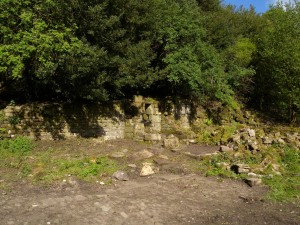 The site at the rear of Wycoller Hall is coming along. In Autumn it was an inpenetrable wasteland of saplings, brambles and weeds, now it is a largely plant-free area that can be easily walked across. There are still problems to be tackled, like a big pile of stone tipped on the site, but we aim to tackle one thing at a time until the site is restored and added to the Wycoller Hall open area.

By 11am, only two of us arrived for this session but we were encouraged because the Country Park chainsaw ‘team’ had removed all the tree stumps we had left them two weeks ago. The main task of the day was to get the site ready for the archeological excavation on Saturday, which has got the ‘go-ahead’ from the County Archaeologist and English Heritage. 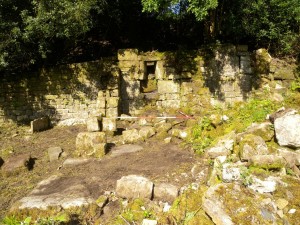 We cut down the final overhanging elder and holly branches using them to form a barrier to discourage people from sliding down the hill to the top of the wall. All the saplings growing in or near the ruins are now cleared but we have kept the overhanging branches from trees further back so the tops of the wall are shaded. This will discourage new growth. We then set about removing large amounts of moss and nettle roots and generally tidied up for Saturday. We finished at 5.15pm feeling pleased at having got things finished in time. 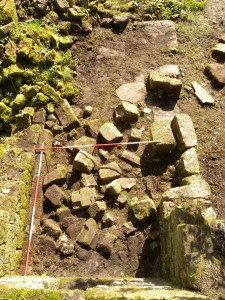 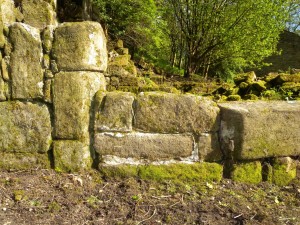 May 15, 2014
Uncategorized Comments are closed DRM
← May Garden Wycoller Hall Excavation – 17th May →