After meeting at the Corner Café in Crawshawbooth 9 intrepid vaccary hunters nipped out between showers and drove to Marl Pits Leisure Centre car park, Rawtenstall (BB4 7SN).  Our aim was to find the location of Deadwinclough vaccary. The date was 10th May.
We walked up Newchurch Road and turned into Dobbin Lane.  Here there is a pair of semidetached 17C cottages thought to be the one of the oldest buildings in Higher Cloughfold.  We then admired the former vicarage c1890 and took a footpath leading to Lea Bank, an impressive mill owner’s house c1865, which has been turned into apartments.  We walked up Hareholme Lane to join Newchurch Road and passed the Sion Baptist Church.
Just off Edge Lane is another 17C cottage, with a date stone of 1642. 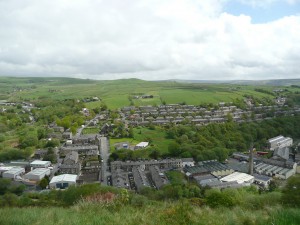 We walked along Edge lane up high above Rawtenstall and had our lunch admiring the views over pastures which may have been part of the vaccary, and watching the rain clouds heading our way!
We walked eastwards and reached the sheer drop to Burnley Road East at Waterfoot.  Here we turned south down Naze Road.  The rain descended and we sheltered until the worst had passed. 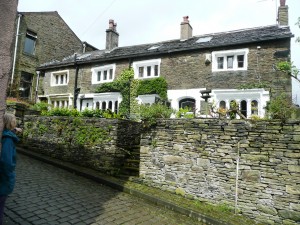 After reaching Newchurch Rd we crossed and went a short distance down Old Street to admire three lovely listed cottages which may be 16C.
St Nicholas Church was holding a fete so we were able to enter and look for Elizabeth I’s crest in the porch, dated 1541.  After tea and biscuits we walked westwards along Newchurch Road.  Some of the group spotted an interesting building not far along the road and fortunately the owner was outside and was willing to tell us a bit about the house and show us the date stone.  I found out afterwards that this is a listed building.
We eventually returned to our parked cars.